To a World Impacted by Terrorism

An open letter to the people of the world:

I was four when the 9/11 terrorist attacks happened, effectively meaning that I grew up in a country full of fear, anger, and resentment towards Muslim people. The Iraq and Afghanistan wars only furthered that fear and anger as soldiers from all over the world were sent to the Middle East to fight Al Qaeda and terrorism. I grew up listening to islamophobic news scare people into becoming frightened of Muslims no matter what country they were from, their age, their socioeconomic background, or their religious views. I listened to people dehumanize the innocent civilians who were being killed by their own countrymen and our armies. I heard the cheers as Saddam Hussein was hung when I was the mere age of 9, celebrating the death of a man that had killed the very people he was sworn to protect.

I was 14 when Osama bin Laden was killed in Pakistan and where I was asked by teachers to discuss if the United States of America had the right to invade Pakistan’s sovereignty in order to kill one of the most hated men in America. I was 16 and living in Switzerland when the Boston marathon bombings occurred, I watched the news as innocent children and adults lives were ended like a candle being blown out in the wind. I watched as the world became more cynical and fearful of Muslims not caring that they were as terrified as we were from the extremists who were impacting their lives as much as they were ours. I was 18 when the Paris attacks happened as I watched from a cafe in Siem Reap, Cambodia and worried not only about those killed, but also those who would be targeted and persecuted for the very fact that they shared a similar religion. I turn 19 in two days and now, I watch as Brussels is mutilated by the effects of terrorist attacks. It feels as though my entire life has been waiting for the next terrorist attack and watching as the numbers of casualties grow everyday whether from death or fear. 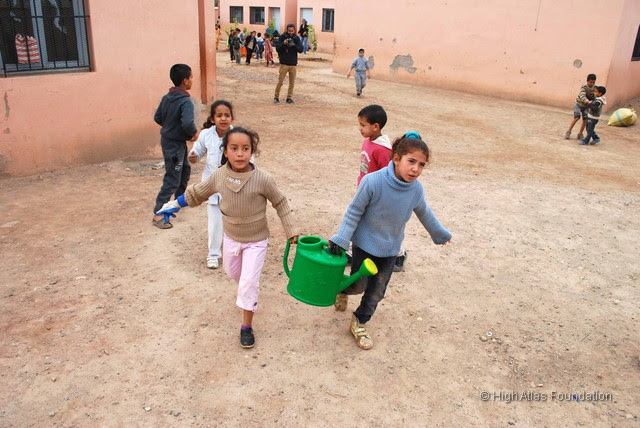 Courtesy of the High Atlas Foundation

It was only three months ago when I flew from California to Morocco to intern at the High Atlas Foundation (HAF) and learn arabic. Three months since I moved in with a Muslim family that have since become my home here in Morocco. Three months since I realized all of the ingrained and unconscious islamophobic beliefs and prejudices I had. I was always so worried about terrorist attacks in the US and Europe but I never realized the pain and fear that Muslim communities go through daily as a result of the fearful media and Western countries. I have friends and coworkers who are worried about leaving Morocco because of the way that non-Muslims will treat them simply because of the fact that they share a similar faith with those extremists who commit terrible acts of violence.

All of the pleas to not fight hate with hate will be posted on social media in the coming months after a terrorist attack, but I know that those messages will be followed by people who demand war and vengeance on innocent people. Living in a Muslim country has taught me over and over again that we need to separate the religion from the people. There are amazing Muslims, Christians, Jews, Buddhists, Hindus, etc. all over the world and we can’t condemn people for the actions of a few. We need to fight terrorism from the root. We need to instill values of respect and understanding instead of hate and vengeance. Courtesy of the High Atlas Foundation

There are so many ways to counteract terrorism; education, interfaith dialogue, and intercultural dialogue are some of the ways that I’ve learned about while being in Morocco. Those most at risk of becoming religious extremists are those who are both impoverished and uneducated and who feel angry or wronged by their country or fellow citizens.

The High Atlas Foundation is attempting to create programs and opportunities for impoverished, uneducated, and scorned members of the Moroccan community so that there is less of a chance of turning to radicalism. HAF is targeting youth who are in prison for minor drug crimes so that when they are released from prison they will have skills and will be able to integrate back into Moroccan society despite the stigma about former convicts. HAF also is partnering with local Moroccan universities to combat terrorism through education and community-building. The students have the opportunity to discuss issues within their schools and communities so that they have a voice and can instigate change in their own country. HAF is also doing interfaith work between Moroccan Muslims and Jews through tree planting nearby ancient Jewish cemeteries.

Instead of lashing out and believing false stereotypes, show compassion and kindness and invest in stopping terrorism at its root. Help stop the problem before it starts and educate yourselves and others about the root causes of terrorism before we blame those who are themselves victims.

A youth born in to a world impacted by terrorism.

Emma Tobin is a photojournalism and social media intern at the High Atlas Foundation. Ms. Tobin is currently on her gap year where she has been able to explore both Southeast Asia and North Africa.