The General Assembly proclaims this Universal Declaration of Human Rights as a common standard of achievement for all peoples and all nations, to the end that every individual and every organ of society, keeping this Declaration constantly in mind, shall strive by teaching and education to promote respect for these rights and freedoms and by progressive measures, national and international, to secure their universal and effective recognition and observance.
- Preamble to the Universal Declaration of Human Rights

It was Eleanor Roosevelt who helped to craft and then championed the Universal Declaration of Human Rights whose  anniversary we celebrate on 10 December.  She was appointed the US representative to the UN Commission on Human Rights and was then chosen as its chairperson.  Originally, her selection was a reflection of respect and gratitude toward her husband Franklin who had been the US leader during the Second World War and who wanted to avoid a US refusal of a world institution as had been the case with the League of Nations after World War I. 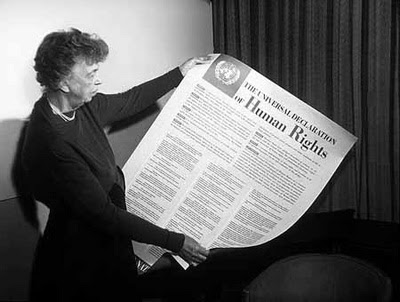 However, Eleanor was much more than the widow of FDR.  She had always been an ‘internationalist’ concerned with the establishment of machinery that would ensure a lasting peace.  In 1939 she had read Clarence Streit’s Union Now and had the author dine at the White House to explain his ideas of a federal union among democratic countries.  She accepted to serve as a delegate to the first UN General Assembly held in London “largely because my husband laid the foundations for the organization through which we all hope to build world peace.” (1)

She worked closely at the first UN General Assembly with Adlai Stevenson, a member of the early World Citizen Association founded in 1939.  Stevenson headed the US delegation for preparing the General Assembly and the Commissions. There were only 18 women from 11 different countries at this first UN meeting in London, but at least, a permanent commission on the status of women was created.

Mrs Roosevelt’s work as chair of the Commission on Human Rights was crucial in integrating the world’s ideologies into a truly universal conception of human rights. There were strong-minded representatives as key members of the Commission which wrote the Declaration: Dr Peng-Chun Chang of China, Dr Charles Malik of Lebanon, and Professor René Cassin of France with Dr John Humphrey of Canada as the first Human Rights Director.  Once the Soviets saw that the human rights efforts would grow in importance, the USSR named higher level representatives, in particular Alexander Bogomolov, an experienced diplomat and legal scholar.

She helped to bring together into one document – The Universal Declaration – the political and civil rights that are the core of the Western liberal tradition with the economic, social and cultural rights that had been at the fore of the struggles for social justice of the 1920s and 1930s.

Finally, on 10 December 1948, the UN General Assembly adopted the Declaration, 48 countries in favour, none against, 2 absent, and 8 abstentions: Byelorussia, Czechoslovakia, Poland, Saudi Arabia, Ukraine, Union of South Africa, USSR and Yugoslavia. With the Declaration, as Herbert Nicholas in The United Nations as a Political Institution noted “ Man, the individual human being, has emerged on the international scene which in the past was the jousting ground only of States.”

Human rights have become today  a central framework of the world society..  People, no matter where they live, increasingly demand respect for their human rights and judge the institutions of the world society by how well these institutions respond to a comprehensive vision of human rights.  Food, shelter, employment, education and access to health care go hand in hand with demands for equitable and effective justice, the right to participate in government, to express one’s thoughts freely and to live by one’s own moral and spiritual convictions.