17 October was set by the United Nations General Assembly in resolution 47/196 as the International Day for the Eradication of Poverty.  October 17 was chosen as the anniversary of a 17 October 1987 meeting in front of the Trocadero in Paris near where the Universal Declaration of Human Rights was signed in 1948.  The 1987 meeting was called as a reminder that the victims of extreme poverty, hunger and violence do not enjoy the rights that are set out in the Universal Declaration. 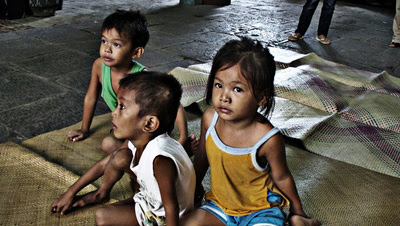 In some ways the 1987 meeting is an indication of how long ideas and values take to be institutionalized in the world society.  It took nearly 40 years for awareness to grow that there were people who fell outside the development and welfare provisions of governments. It took another four years for that awareness to be enshrined in a General Assembly resolution.  Nevertheless, we must be thankful for resolutions which highlight the obvious. We can build upon that awareness and the resolution.

Somewhere along the line of the growing awareness that poverty exists came the realization that the eradication of poverty was not only the concern of governments but also of the poor and marginalized themselves. To use the most commonly-used image: poverty reduction is not only a “top-down” effort (governments toward citizens) but also a “bottom-up” process (of the poor toward the holders of wealth and the governmental decision-makers.)  Thus today, there is an awareness that the marginalized sections of society should be involved in the decision-making process which determines the socio-cultural, economic, and political life of the State. This awareness is often termed “popular participation”, “community organizing” and “grass-roots organizations.”

As an Asian Committee for People's Organization states in its manual for organizers Organizing People for Power “It is the oppressors who, after all, control corporate decision-making, the government apparatus, the media, and the police.  Although the people vastly outnumber the oppressors, in their disorganized conditions they lack the power to oppose their enemy.  By themselves, the poor farmers, workers or slum dwellers are no match for the oppressors in terms of money or resources...The transfer of power from the hands of the oppressors to those of the oppressed is not easily accomplished at one fell swoop.  Part of the difficulty lies in the 'culture of silence' that has been inculcated into the people's consciousness by centuries of domination.   By slow degrees, the oppressed have internalized a subservient mentality that is reinforced by their daily experience.  They find it difficult to see their liberation in terms of their own strength, and look instead outside themselves to an external force to come and save them.  The oppressed cannot imagine that the power they await lies within them, and therefore, they lapse into a state of passivity awaiting liberation from heaven or a messianic leader.”

However, there are growing efforts by which people are released from their culture of silence and demand a meaningful participation in society through socio-economic projects which enhance their bargaining power. Such approaches involve tensions and conflicts, but conflicts can have a potential for creativity. As a set

of notes for workers engaged in rural development and adult education written by the Xavier Institute of Social Service in Ranchi, India states “Projects should be the result of a process where people have perceived the need for them.  This will require a clear-cut vision and manifestation of a just society.  Projects can be undertaken as instruments for social transformation, and development programmes must make the conscious effort to translate these projects into useful tools to hasten the establishment of a just society.”

Today, different social conditions, identities, religious beliefs shape our one humanity.  We share the responsibility to ensure the dignity of each individual.  We need to find creative ways of ending marginalization and exclusion of groups and individuals. 17 October should stand as a time of re-dedication to finding creative paths to this goal.